Who the hell is OtterPop!?

Hello and thank you for taking time to read -- usually people are just here for the dirty videos (savages!)... But i can see that you are far more cultured than the average web-browser... Well, glad you could drop by... and make yourself at home.
Here is my official BIO, if it can be believed:
About OtterPop!
OtterPop! is an exhibitionist aquatic mammal who came to life in the latter decade after being fired from SeaWorld for being too suggestive.  Making a shady deal with an underwater sea-tranny who helped him take human form, he moved to Seattle and made his debut at "Magnum", Sylvia O'Stayformore's Male Dance Extravaganza, where he delighted many of the gays with his expressive movements and flashy costumes.   Unfortunately, the sea-tranny also stole his beautiful singing voice (which as it turns out, wasn't so beautiful because he smoked as a young pup.  So, technically, he got the better end of the deal and tries to pass off his nasally honking as "Dylanesque", if that can be believed).
Since then, he's gone onto to perform monthly at "Bacon Strip", has made appearances at the Tempting Tarts Burlesque, and performed at Seattle Art Museum night Remix.    He has produced his own night called "Silver - a burlesque Tribute to Andy Warhol".
Like Oprah, OtterPop! believes in paying it forward and hopes one day to build an underwater school for other members of the Lutrinae family who seek a career in Merlesque. ﻿ 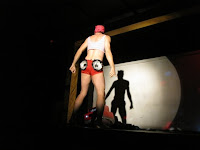 Otterpop:
1. A Male Burlesque Dancer of ill repute and ill means, but has a rockin rack and killer set of dance moves.
2. A Merlesque* Dancer
3. A delicious, technicolor icy-treat in several flavors that feature several anthropomorphosized commercial icons from the Lutrinae family of aquatic mammals.
(*Merlesque: Male Burlesque, go here for a definition)